Dr. Visit. To have the DBS surgery or not that is the Question 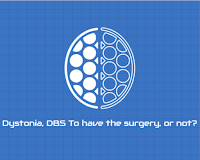 I had my Doctors visit yesterday, and it was interesting as usual. My neurologist knows his stuff, but he is a little Qirky.
I got some news I did not expect though. He is going to send me to a DBS specialist because he thinks that it will help with my type of Dystonia, even though he will admit he is not sure what kind we have.
This movement disorder specialist is supposed to be one of the best in the country he can install the DBS Device and program it. They say it is a new DBS system, but the only thing new about it is the placement of the leads, and they are not Positive it would work. Another Downfall is I would be in a Coma for about three weeks, or however long the Device took to start working, because they do not want me to wake up and have a storm, Which for me brings up another question? If he can program it why can't he stop the storm relatively quickly with the device.
I do not have to have the device put in, but with the medications I am on he has to prove that we are doing everything that we can.
So my next step is to wait for this doctor to call and first they will give me a Psych evaluation, for those who know me you have got to feel sorry for whomever gets that job, they may end up in a Psych ward themselves after they are done. After the Psych evaluation I will meet with the doctor and he will explain to me in detail how the procedure works and if I am I candidate for it. The one thing my Doctor did say is that in Dystonia patients the battery does not last as long so they would have to replace it quite often. My Doctor has one Dystonia patient that had the surgery and has had the battery replaced 7 times in a year and a half, which to me seems like a crazy amount of times for as little time as she has had it. He also told me that the battery can never Die or I will never get back to the point where I was before I got the DBS put in.
I am already familiar with letting a battery die they did that to my sister and she has been worse since that happened. I think, and she can correct me if I am wrong, she has a wireless charging battery now so they do not risk it dying again.
There are Pros and cons to having the surgery done. On the one hand maybe it will help and I can get back to Normal or on the other hand, as my doctor has said, they do not know what kind of Dystonia that we have. There are more components to what we have than most.
My Wife is against the surgery because she sees me everyday, and does not want to see me in a coma for any length of time, and I understand that, but she said she would not stop me from having it done if it was something that I wanted
So I have all the pamphlets that I am going to read before I go visit this new Doctor and we will go from there.
Please keep us in your thoughts and prayers as we carefully consider all of the options that we will be presented with. We both are trying to keep an open mind, but that is very difficult, and if I do decide to have it done My wife will need alot of prayers along with the rest of my family, because they have been through it before.
My family saw my sister go through it and I do not think they relish the thought of watching another family member do the same thing.